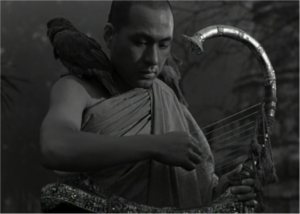 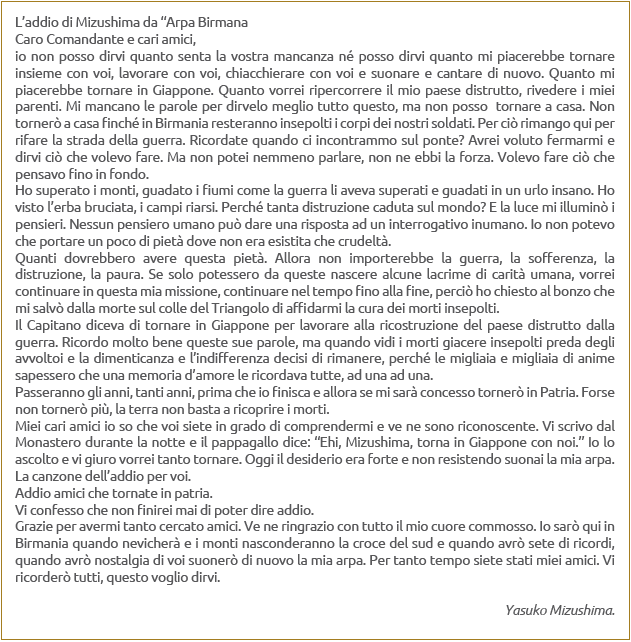 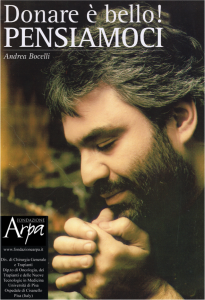 Further to Maestro Bocelli’s honorary presidency it seemed appropriate to find a musical symbol to identify the Foundation.

Arpa is not an acronym but is rather the musical instrument, worldwide popular, in all cultures since the outset of time, in different forms and acoustics.

Three are the inspirations for Arpa’s name: all of them rich of meaning and importance, which all along guide the Foundation’s aims. The harp, consecrated by Nabucco’s slaves choir; the harp from the Zen tale “True friends”; the masterpiece movie ”Biruma no tategoto”  (The Burmese harp).

The Hebrew slaves choir, aka the people, powerfully pleads the too-long mute harp:  “le memorie nel petto riaccendi” (“you raise the memories in our chests”). It urges to seize old virtues, founding above them a redemption pact. In other words, in rough times it’s more than ever necessary to restore a moral strength.

Long time ago, in China, there were two friends. One was very good at playing harp. The other was very good at listening. When the former played or sang of a mountain, the latter said: “I can see the mountain, as if it were in front of us”. When the first played of a stream, the one listening burst out: “I hear the water flowing”. But the listener got hill and died. The first friend cut his harp strings and never played again. Since then, cutting the harp’s strings, has always been a great friendship proof.

Which is therefore the use of being lavish without sharing and involvement inspiration.

Mizushima, the key player of  “L’arpa Birmana” (Japan 1956, director Kon Ichikawa. San Giorgio prize at Mostra Internazionale del Cinema di Venezia, 1956) fabricates the instrument, playing which he revives the spirits of his comrades. They are worn out by the march thru the Burmese forest, trying to escape the enemy during the war.

Mizushima converts himself in a bonze, parting such from his comrades that he pretends not to recognize them. He won’t physically be aboard the ship taking his fellows back home.  He will ideally be there with a farewell letter, his spiritual will, put in the hands of the Captain. Once under way, he shall read it to his friends, homeland bound.  They will be startled and amazed coming to know Mizushima’s life choice and his existential priority: a duty, a role. An heart breaking farewell, like the music of the accompanying harp.

I’m unable to say how much I miss you, nor I can say how much I’d love to come back with you, work with you, chatter with you, play and sing again. How I would go back to Japan. How I wish I could roam my thorn Country and see my relatives again. I miss the words to express all of this in a better way, but I cannot go back home. I won’t come back till in Burma there will be unburied bodies of our comrades. Therefore I stay here, to go back over the war roads. Do you remember when we met on the bridge?  I wish I stopped and told you what I intended to do. But I couldn’t even talk, I was forceless. I wanted to do what I planned, to the very end. I rode over the mountains, I waded across the rivers, like the war had crossed them with an insane scream. I’ve seen the burnt grass, the charred fields. Why such devastation fell on the world? And the light enlightened my thoughts. No human thought can answer a cruel question. I couldn’t, but bring some pity where only ruthlessness existed. How many should feel this sympathy. Then war would not matter, nor pain, nor destruction, nor fear. If only a few tears of human charity could raise from these, I wish to bring my mission ahead, continue in endless time, up to the end, and that’s why I asked the bonze who saved me from death on the Triangle hill to give me the custody of the unburied men. The Captain told me to come back to Japan and work to reconstruct the Country, thorn out by the war. I remember his words very well: but when I saw the dead lying down unburied, pray of vultures, and the forgetfulness and the indifference, I decided to stay, so that the thousands and thousands of souls knew that a loving memory reminded them all, one by one.

Years will run, many years, before I finish, and then, if I’ll be allowed, I’ll come back to our homeland. Perhaps I’ll never return: the soil won’t be enough to cover the dead.

My dear friends, I know that you can understand me, and I’m grateful of such. I’m writing you from the Monastery, during the night, and the parrot is saying: “Hey, Mizushima, come back to Japan with us”. I listen to him and I swear I’d really wish to return. Today my desire was strong, I couldn’t stand it I played my harp.

The farewell song for you. Farewell my friends, going back to homeland.

I confess that I would never stop saying goodbye.

Thank you my friends for looking so much for me. I thank you with all my touched heart: I shall be here in Burma when it will snow, and the mountains will hide the south cross, and when I’ll be memories-thirsty, when I’ll feel nostalgia of you, I’ll play my harp again. You’ve been my friends for so long: I’ll remember you all, that’s what I want to say.

«…Some years ago I was in hospital to assist my father who was seriously ill. I took part to his and other ill people sufferings when Prof. Mosca, head of the Dept. asked me to support a Foundation aimed at promoting the development of medicine.

I was surprised and worried, at the same time.

I did not give a prompt answer to such a demanding commitment.

I thought of the sufferings of the people I have met by chance and the incessant work of doctors. I realized, at the end, how helpful my popularity might be to the cause and I accepted to be the Honorary President of ARPA. Its name was chosen by Prof. Franco Mosca who had been impressed by a Zen story, telling that music exists as far as there is someone listening to it.

The musical instrument named “harp” has the peculiarity to make all the strings resonate if only one string is plucked. Thus, I like thinking that the generosity of one person, can stimulate others to do something in favour of the public welfare. I want to thank in advance, all people who will support us».