We are proud of our testimonial Maria Luigia Borsi.

Arpa Foundation would like to inform you of the upcoming North American release of a new recording featuring the Italian soprano Maria Luigia Borsi, the London Symphony Orchestra and conductor Yves Abel.

Release dates are as follows: 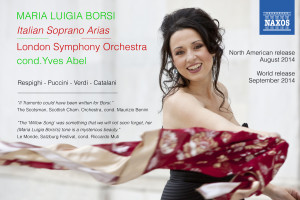 We truly hope that you will support and appreciate this project. For more details please see the attached JPEG. To view the North American video promo you can use this link: http://www.youtube.com/watch?v=tXJcF-1KrFM

Hailed by critics worldwide for her vocal dynamism and interpretive prowess, Italian lyric soprano Maria Luigia Borsi has forged a career that has taken her throughout Europe, Asia, and the United States.

Ms. Borsi began her career as Liù in Puccini’s Turandot at the Teatro alla Scala. She made her Venetian debut for the historic reopening of the Gran Teatro La Fenice singing the role of Violetta in Verdi’s La Traviata, conducted by maestro Lorin Maazel.